Random thoughts that I couldn't keep to myself . . .
4 Comments

September 11, 2001 began like any other day for me. It was a Tuesday, so I was meeting with men from the church for breakfast at the Corner Cafe just a few miles down State Highway 96 from my church in Clifton Springs, New York.

The breakfast for us was uneventful.  As I recall, there were just a few who showed up this particular week, but we enjoyed a great breakfast and good conversation as we always did. Eventually it was down to just Cliff and I finishing our coffee before we left, when another patron mentioned that a plane had run into the World Trade Center. I found that a bit hard to believe and Cliff and I exchanged looks of disbelief. I finished my coffee and headed home, only mildly curious what may have happened that caused that other customer to think a plane had hit such a large building in broad daylight.

When I got home, I knew it was more than a misunderstood news story. I saw it in my wife’s eyes. 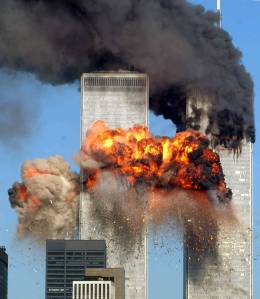 A friend of my wife had called and told her to turn on the TV so it was already on as I took my place with millions of other people around the world to watch what was going on in New York City, just 300 miles away from me.  It wasn’t long before I saw the 2nd plane hit the 2nd tower and the news anchors begin to speculate that perhaps this wasn’t some sort of freak accident.

Over the next several minutes, or maybe it was hours, I watched many other images that have become iconic in our country’s collective memory: flames and smoke bellowing out of the twin towers; men and women jumping to certain death to escape what must have been unbearable heat; rescue workers rushing to the scene, many of whom would not survive that day; first one, then the other tower of the World Trade Center cascading down to a mound of rubble.

Then came news of the plane that hit the Pentagon and later the downed plane in Shanksville, Pennsylvania. Our country seemed so vulnerable.  We were under attack and it appeared as though it couldn’t be stopped.

About then my “pastor sense” kicked in and I knew that I needed to do something, anything.  If I was torn up inside watching what was going on, I knew that many in my community would be too.  I immediately went over to the church, unlocked the doors and turned on the lights.  I started soft music playing in the sanctuary and put a message on the church marquee which simply said, “Open for Prayer.” As it turned out, churches across the country had been doing the same thing.  In a time when people felt alone, vulnerable and helpless, being able to pray gave them a way to do something to help. It gave us something to do.

My kids had a 4-H meeting that night, but with all that was going on, my wife needed to keep them close. She couldn’t let them out of her sight. When I think back on it, it reminds me of the passage, “He will cover you with his feathers, and under his wings you will find refuge; his faithfulness will be your shield and rampart” (Psalm 91:4). I think my wife wanted to keep the children close for her peace of mind, but also not knowing how widespread this situation may be and where the next attack may take place, she was doing what she could to protect them.

I knew that in just a few days it would be Sunday and I would be facing my congregation so needed a word from the Lord. My mind went to Luke 13:1-9:

‘Sir,’ the man replied, ‘leave it alone for one more year, and I’ll dig around it and fertilize it. If it bears fruit next year, fine! If not, then cut it down.’”

I did not claim that the attack was a result of the sins of the United States.  Neither did I claim that those who died, died because they needed to repent.  Instead, I expressed what seemed to be the thrust of the passage, that those who die by tragedy are no worse sinners than we are, but if we need to repent and don’t, judgment may truly befall us-both physical and spiritual-both individually and corporately.  As I recall, it was well received as the tragedy of 9/11 caused many Americans to really reflect on what was important in life and if our relationship to God was all it could be.

I had already been talking to a chaplain recruiter for over a year about going back into the Army as a chaplain, and had been attending Northeastern Seminary since the Fall of 2000 working toward meeting the Army chaplaincy’s educational requirement. This new attack on my country, however, caused me to redouble my efforts with a greater urgency.  I knew that the world we lived in would be changed forever, especially for our military members, so I wanted to do my part. Many in the United States had the same desire as enlistments spiked a bit after 9/11 not leveling out until 2005.

The attacks of 9/11 did cause me to review my reasons for joining the Army, however.  Before 9/11, it was essentially a garrison Army training for war. Now, there was little doubt that anybody who joined would deploy to a combat zone in some far away land (for me and many others, it was both Afghanistan and Iraq). But I recognized that this is the time when service members would most need spiritual guidance, encouragement and support. As a non-combatant by virtue of my position as a minister, this is what I could offer them.  I could go with them, even into harm’s way, and “bring God to Soldiers and Soldiers to God.” Finally receiving my commission and reporting for duty in January 2004, this has been my life ever since.

← Is Russia Becoming the “Protector of the Faith”?
Honoring Fallen Soldiers →

There's a lot of stuff on this sidebar! See below: