Random thoughts that I couldn't keep to myself . . .
1 Comment

Posted by Daryl Densford on February 4, 2018 in Christianity, Family, Genealogy

The Weeks Leading up to the Funeral

From about Thanksgiving, it was hard to get dad out of bed for just about anything. From bed, he would ask for ice cream and Diet Coke. At the beginning, he would feed himself, but as the days went on he would ask to be fed.  Not being able to get him to his regular doctor, we were advised to take him to the Emergency Room. The first time, they assumed that he was weak because he wasn’t taking his medications faithfully, so we went home determined to see that he took them all every day. On December 18th, after a couple of weeks without improvement, we couldn’t get him to get out of bed to take him for a doctor’s appointment so were advised to call an ambulance to take him to the ER. This time, they blamed his weakness on not getting up and using his muscles.  Twice he was in the ER, and both times they couldn’t find anything really wrong with him and sent him home.

On December 28th, 2017 my sister Laura (visiting for Christmas) and I took him to the doctor (with help from Hannah and Jordan to get him out of bed and dressed) to get a referral for home health care to try to help him get his strength back and get back on his feet. At the doctors office, they couldn’t get a good blood pressure reading so, assuming he was dehydrated, sent us over to the Emergency Room. By that point he was pretty weak and not able to get up for much of anything. Little did we know, he would never come home.

Dad being visited by mom, Emily and Hannah on December 29th, in the hospital in Lebanon.

.In Springfield, they operated on dad’s leg and said the surgery was a success, but the next day it closed back up and he was no better off. The surgeon didn’t think that dad would survive surgery to remove his leg, so mom decided not to have it done. At this point, there wasn’t much they could do but keep him comfortable, at least now he could eat ice cream again!

We were able to get him into a skilled nursing facility in Lebanon where mom could visit him more often. His first night there was Monday January 22nd, 2018. With the leg not having circulation, infection grew and became too much for his body to fight and he passed away on January 29th at about 11:20 p.m. 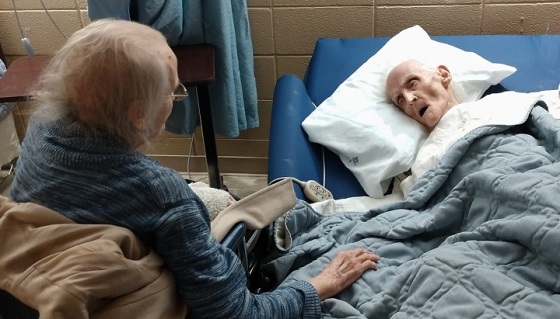 I took this picture of mom and dad just about 1 1/2 hours before dad died. 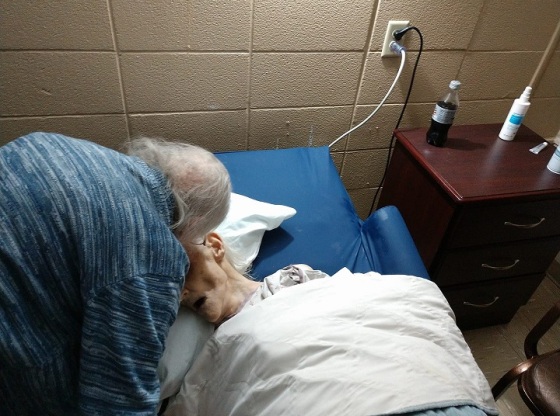 Mom kissing dad goodbye about 8 minutes after he took his last breath.

The rest of the week was full of making arrangements and receiving guests. Once my sister Laura got to town, we met with the Funeral Home and made plans for a Saturday visitation and funeral.

The Day Before the Funeral

Mom had been asking a lot about dad, not remembering his passing. She wanted to see him again, so we went to the Funeral Home to view his remains. It was very hard on mom, and us all, to see dad no longer full of life. Even knowing that what we were viewing was only a shell and he was no longer there but in Heaven without pain or physical limitations, our pain was real as we grieved his passing from this life. 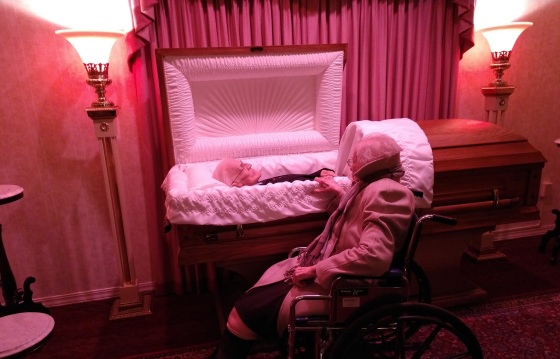 Two of mom’s sisters and a niece arrived Friday evening and we brought mom to the church to have dinner with them and Laura’s family…the church was where we could have room for everyone with no steps for mom to have to climb. It was great for mom (and us) to see her sisters Donna, Mary Ann and Mary Ann’s daughter Megan.

Dad’s brother Byron, his wife Charlotte and their daughter Meredith got to the Funeral Home just before the service, having been delayed on their train ride from California. Several people were also there from Fort Leonard Wood, where I am assigned, as well as friends from church and even friends of Laura’s who came from Tennessee. We were very blessed by the support shown by our family and friends.

My pastor from Freedom Church of the Nazarene, where mom and dad attended when they could, officiated at the funeral and dad’s granddaughter’s Emily and Hannah, his niece Meredith and I eulogized him. I also read a nice letter from dad’s brother Bob which told about their early life and the impact that dad has had. 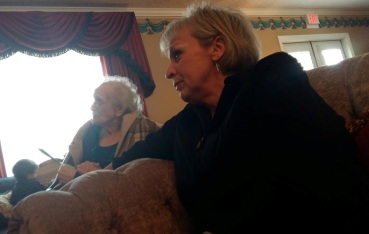 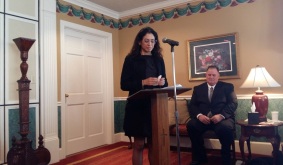 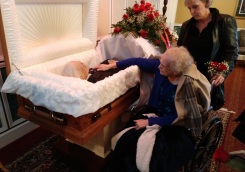 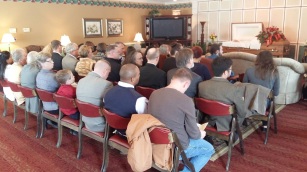 This pictures at the end of the video didn’t come through too well so here they are again in order:

Dinner After the Funeral

The church provided a wonderful meal for the family after the funeral service. It was a great time to not only be nourished, but to visit together and talk about dad. One of the things that dad consistently did at Christmas and birthday celebrations was put bows from gifts on his head. Some of the grand-kids brought bows for us to wear while we ate, adding to the celebration of dad’s life and memory.

Beside those who were able to attend the funeral, there were many others who couldn’t be there but sent us notes and made comments on posts about what dad meant to them and many times how he helped changed the direction of their lives toward God. We’ve been overwhelmed by the stories of how God used dad over the years and appreciate those who took a moment to share.

We also really appreciate the financial gifts that so many people gave to help pay for dad’s funeral-about the only thing dad didn’t plan for. The generosity  that we have seen has been so encouraging and a testimony to the impact that dad had on so many people.

Now life begins to go on. It’s going to be really hard for mom, especially with her memory problem and having to re-live her grief whenever she is reminded of dad’s passing. Now also begins a year of firsts as we celebrate birthdays and special occasions without him. But more distant in the future, we have the hope and assurance of a reunion, when we cross over and enter Heaven’s gates, where I believe dad will be waiting for us.